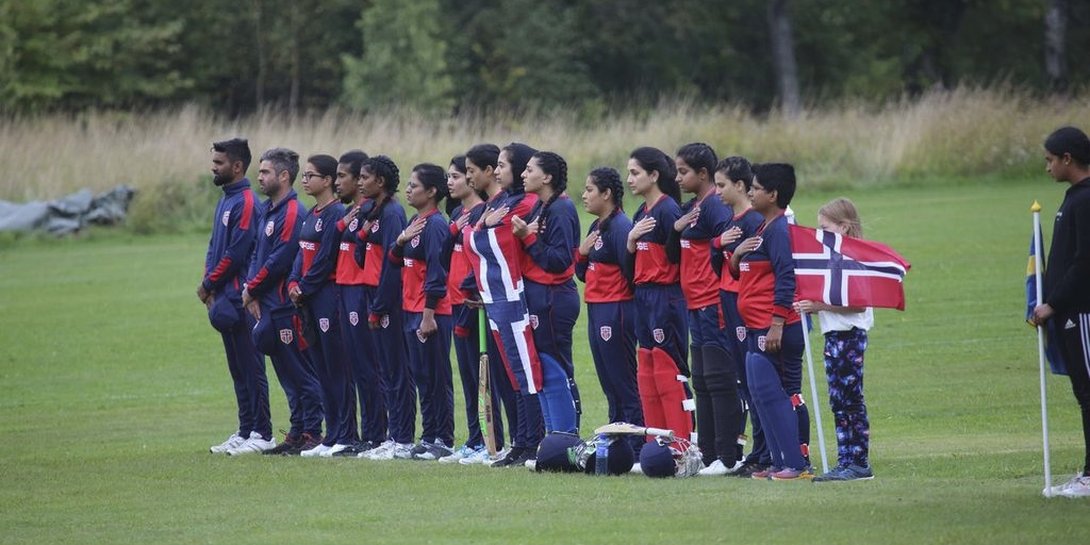 Our women team left from Oslo on Thursday evening and arrived in Köping around 11 in the night.
Day 1 was planned as a traning day with the Swedish team and their head coach Jonty Rhodes. The weather was not optimal but the ladies showed tremendous energy and enthusiasm. After individual warm ups, both the teams got very useful insights into basic fielding skills. Post lunch both the teams had individual net sessions which were unfortunately cut short due to frequent drizzles.
Tomorrow two T20s are planned and the weather looks promising. The first game will start at 11 am and the second at 3pm.

Our women team played two T20s against the Swedish on the second day of the trip. We lost the toss on both occasions and were asked to bat first.
In the first game we had a rocky start and managed a low total. The bowlers did a good job but 48 was tough to defend and we lost by 6 wickets.
The batting unit bounced back in the second game and put up a decent score of 92. However we the Swedish opener and middle order batted well and chased is down in the 15 over.

This was the "big one". We had as many as 5 debuts. We remained unlucky with toss and we're again asked to bat first. The Swedish got better of us in the first innings. While our opener stayed there till the end, frequent wickets from the other end and lack of partnership meant we had again to defend a low score of 52. The bowling and fielding unit were pumped up and determined to defend with whatever it would take. We kept getting wickets at regular intervals and never allowed the Swedish to settle down. There were beautiful catches, intense lbw appeals and a sharp run out. We needed two more wickets and there a couple of half chances that did not come our way. Eventually the Swedish team won by 2 wickets. Our team showed a lot of character and intensity. And there were lots of learning. That's what we bring back from this tour. We are determined to come back stronger.